I woke to the sound of someone knocking on the window and looked at my cell to see how long I'd been dozing. It was 8am, the birds were singing merrily and the sun was coming up quickly. Mark was playing in the front of the car, studying the controls of a conditioner, while I was trying to catch up for the sleepless night.

As I lifted my head off my backpack my eyes froze to the sight of 5 policemen trying to peek inside our car. Very quickly I realized what was happening: someone saw Mark through the windshield and called the police. Because they could not see me through the tinted glass in the back of the car they thought that the child was left there unattended. It was still cool outside (about 55F), however leaving a 2-year old alone in the car would definitely constitute a case of neglect. The policemen took the call very seriously: there were 2 officers from the highway patrol, 2 officers who arrived in an undercover vehicle and another one on a motorcycle. I am not sure now, but I think I also saw a ranger among them... They all rushed there on early Sunday morning!

That morning we took Lev to the airport for his 6am flight. The forecast was predicting another heat wave, so we made our plans to go to the ocean afterwards. However, we had to wait until at least 9am for the sun to warm up the pebbles at our favorite beach, and chose a beautiful vista point to watch the sunrise over the Silicon Valley in its full glory and have a nap before we travel any further. Mark didn't want to stay under the blanket for long and was looking for some fun. He was just getting ready to spread my chewing gum over the driver's seat when the police arrived - perfect timing! 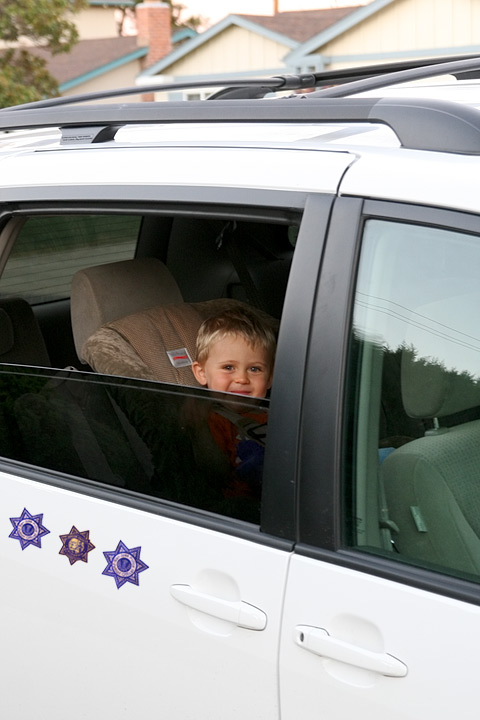 I was feeling terrible to unwittingly spend the time of so many busy people. When I opened the door of our van and showed the officers that we were fine, they looked so relieved. They probably felt weird, too, because they all took their turns to apologize for the inconvenience. They presented Mark with a real junior policeman sticker-badge, and we wished each other a good, peaceful day.

We thanked them for the shiny foil badge and then I recalled that it was already Mark's second police sticker! The first one he got a few months ago from a nice police lady at the airport. Mark was trying to help me with the luggage at the gate, and that sticker came really handy: it took Mark's attention from the luggage for the period long enough for me to snatch the suitcase out of his hands.

The third label joined our collection the very next Monday. We were walking on Santana Row and as we were crossing the street we saw a policeman on a motorbike, all dressed in black leather and looking very stylish. Mark was so vividly interested in his bike and ammunition that it didn't take us long to coax yet another sticker. Yay! So now we have three of them, enough to call it a collection.

I find it quite amazing. Perhaps, giving out junior police stickers is a part of a promotional police campaign, along with sheriffs driving cute black and white police VW Beatles. It serves as a nice way to initiate discussions with the children about the role and duties and goals of the police. I've been told that policemen are indifferent if not opposed to the use of any police-related symbols by ordinary citizens for car decorations. This makes perfect sense and I respect them deeply for this and for their noble service. But would they be able to resist Mark's collection? ;)