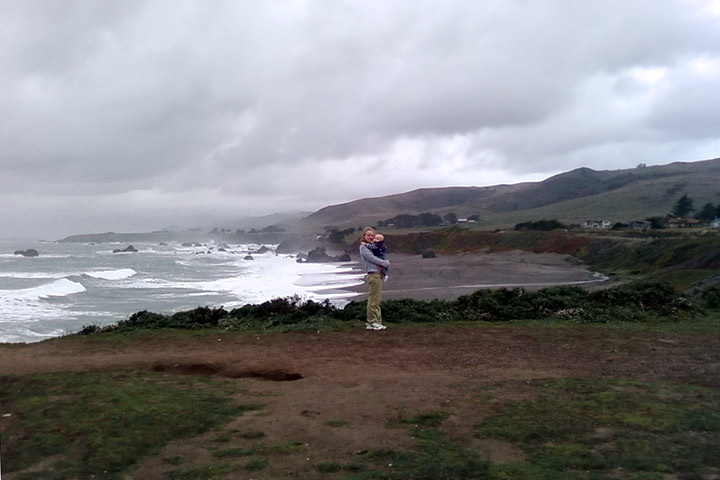 Last weekend we made a trip to Fort Ross. This historic place is located about 130 miles (200 km) to the North-West from us, and is known as the southernmost settlement in the Russian colonization of North America in the 19th century. Many things in that area bear the touch of the Russian Empire: the Russian river (formerly known as Slavyanka), lake Berryessa, the town of Sebastopol. We thought it was well worth seeing.

Well... we didn't make it. We set off too late and only managed to get to the Fort at about 6PM, 1.5 hours after it was closed to visitors. So the California National Historic Landmarks plate number 5 was practically all we could see there. Yet, the trip was not disappointing at all: the views of the hills and green pastures on our way were magnificent, and the ocean was as staggering as usual, with heavy waves rolling in to the rocky shore as the day was dawning.

Once we got out of the car to look at the ocean and take a couple of pictures, I realized that I forgot the camera's memory card at home. At least my cell phone didn't run out of battery, so I can now boast a few nice additions in the mobilography section. We were also lucky to spot an interesting artefact - a geodetic mark installed in 1930 for the purposes of the National Geodetic Survey.