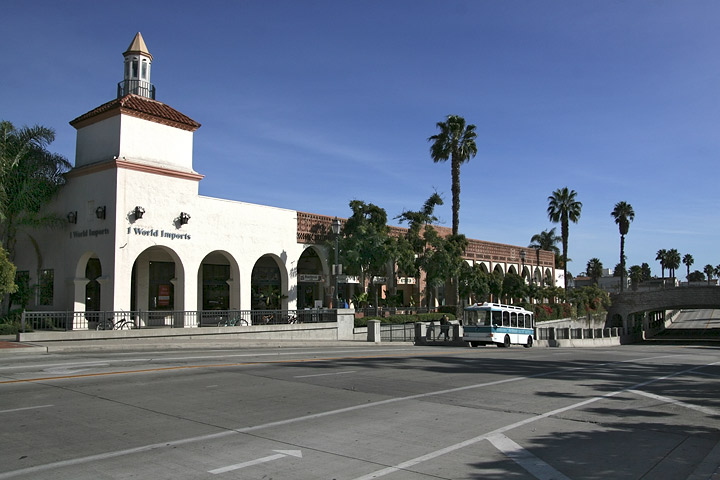 On the weekend of 21-23 of December 2007 we made our first all-family trip to Santa Barbara, which is also notable as our most extemporary vacation so far. Lev called me from work at 6pm on Friday, asking to book a hotel somewhere in the downtown of Santa Barbara. Thanks to "The Dog Lover's Companion to California" book, I did not have any difficulties choosing a hotel that would accomodate us with our poodle Bright.

Setting off at 10PM we were planning to arrive in Santa Barbara at about 3AM. And we would have done so even earlier if we did not run out of gas and didn't take the Los Alamos exit in order to get refueled. The night was reaching its coolest point and we were rushing to get back into the cozy warmth of our minivan. But when we were all set, in the dim light of our headlights something caught out attention - a street that looked like we were back in 1950's. We spent about an hour staring at all the amazing artifacts of the past century. Right at the entrance of an old hotel was parked a black 1949 Nash Ambassador Super. 50 yards from it was a prehistoric gas-station. And on the other side of the street one could see a wheel-cart museum and a museum of vintage curiosities. Everything looked deliberately very old and pretty much abandoned, but when we came there again during the light time of the day, we found it to be a lovely place run by nice people. But that was on our way back, after we spent two lovely days in Santa Barbara.

Our stop at Los Alamos delayed our arrival in Santa Barbara, and we only woke up at around 11AM. The sun was shining kindly and the weather was surprisingly warm. We consulted our guide and decided to visit the Botanic Garden, which welcomed leashed dogs. It turned out to be a good idea. Though this was probably not the best time of the year to enjoy local flora, we had a nice hike in the redwoods, observing an old dam biult by monks and discussing genetic health issues in poodles with the garden attendant. Mark was sitting quietly in his stroller, observing the surroundings. We were also quite surprised to see aloe in bloom for the first time. 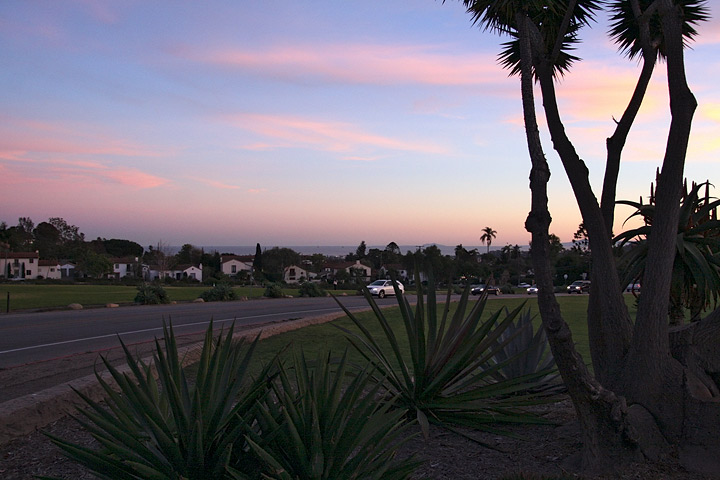 We were on our way back to the hotel, when the view of the sunset over the ocean stopped us right near the Santa Barbara Mission. We got out of the van to see the sunset and a colorful Christmas setup in front of the Mission. The building of the old franciscan Mission looked very familiar, and it took us a while to recall the opening scenes of "Santa Barbara" soap-opera which were showing the Mission's white arches for a split second. At one side of the Mission there was a statue of a monk standing next to the Mission Bell. I asked Bright to sit next to it, to capture a live symbol of the Mission Trail Poodle Club. At that moment many parishioners were walking out of the Mission and Bright got lots of attention from them; many of them used to have poodles in the past and were willingly sharing their stories.

On the next day I woke up pretty early, and Mark, Bright and I headed to the beach to enjoy the views of the Marina and the Wharf. The day was even warmer than the previous one, really delightful. Later on we checked out of the hotel and headed altogether to Santa Barbara downtown, the State street. It is a real delight to one's eyes, very relaxing and entertaining. Having a leash in my hand, I was keeping an eye on all dogs walking on both sides of the street - a habit I developed through many dog-years. There were many dogs, big and small walking their owners on the sunny day of December. Surprisingly, not many of them were purebred. Even those that didn't look like mutts, didn't quite pass for quality representatives of their respective breeds... Bright in his Christmas bandana was a real head-turner, even though he was not freshly groomed. Mark was watching the street decorations with his trademark smile and eyes wide open and received his share of compliments, too. At some point he got so tired of all the people and shiny decorations that he fell asleep right in the stroller, poor baby.

We only stayed in Santa Barbara for two days and had to leave in the afternoon, but we liked it so much that we decided that we need to come there once again! And again... and maybe once more :)